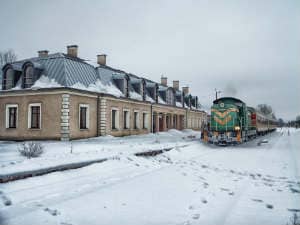 SEATTLE, WA – Late on Tuesday afternoon, 183 Amtrak customers were stranded and snowed in in Oregon. The Amtrak Coast Starlight was delayed multiple times because of the snow. It wasn’t until the 36-hour-trip was over that the passengers arrived back at Seattle’s King Street Station.

The train arrived at the Seattle station at approximately 10 PM on Tuesday night. Because of the snow, passengers who continued on the train from Eugene to Seattle were already stopped in their tracks once in Portland. Due to a fire nearby, that occurred on the railroad tracks, the train stayed in Portland until 5:30 PM.

Later, while the train was passing an inaccessible area— a very remote one— it struck a tree. This left the passengers trapped in an area 40 miles southeast of Eugene.

The people on the train could not depart it. The original destination for the Amtrak train was Los Angeles. Unfortunately, those who traveled from Seattle to Los Angeles were on the train for more than a day and a half. Many people within the train claimed that the conditions were unsanitary and dreadful. Babies ran out of diapers, people were hungry, and some started getting stir-crazy.

The trip continued to be a climatic one. Soon after the train had hit a tree, the journey was a long one. The travel was interrupted continuously. When the group arrived back in Eugene they were greeted by members of the Red Cross. Here, they got food, coffee, water and doughnuts. Sadly, the passengers couldn’t connect to other routes of transportation since Eugene was also snowed in.

The train was finally serviced after reaching Eugene. It is unknown when the Amtrak trains will be running again. At the very least, the trains will be suspended until Friday.

In the end, the trip ultimately ended where it began.