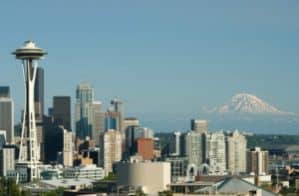 No matter where you go, most restaurants in the U.S. have plastic utensils and use plastic straws for their drinks.

At certain restaurants, employees use as much as 200 to 300 straws while serving drinks to customers.

Seattle is the first city in America to have a new law that bans the use of these plastic food and beverage utensils.

The goal is to eliminate waste in the city as much as possible, and this is the first step.

Plastic Straws and Other Single-Use Plastics Contaminate Our Oceans

The city’s polluting waters and streets have officials concerned. Petroleum-based plastics are harmful to animals and cause pollution when thrown away.

Oceans and the marine life are suffering major levels of pollution. Seattle wants to be the first city to influence other ones to start taking initiative on the pollution problem.

Restriction on disposable plastic started about 10 years ago in Seattle. However, now, the city wants to start helping food businesses slowly turn to the use of compostable food service ware for the protection of our environment.

Businesses are now being advised to switch to the use of paper straws instead of plastic straws. Paper straws are capable of being decomposed by bacteria in the ocean. However, their plastic counterparts are not.

“Strawless in Seattle” organizers claim that most of those straws are ending up in the ocean.

Grocery stores will still provide plastic utensils and plastic straws. However, food businesses will not be able to use them.

The new ban applies only to businesses in the food industry. So, if you’re a fan of using plastic straws in your office, you don’t have to worry. However, there’s no guarantee that Seattle won’t expand this ordinance to other areas.

Chevy Corvette Z51: A Speed Demon For The Ages

Trucker Shortage and the Impact of COVID-19