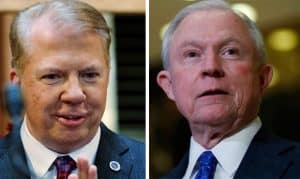 Mayor Ed Murray announced Wednesday that Seattle is filing a lawsuit against the Trump administration. The lawsuit concerns recent threats regarding “sanctuary cities.”

“Once again, this new administration has decided to bully,” Mayor Murray stated on Wednesday. “But bullying and misstating the facts will not stand in the way of how the real laws in this country are enforced.”

“This week, US Attorney General Jeff Sessions told American cities they were breaking the law,” he said. “Apparently, the Trump administration’s war on facts has now become a war on cities … Let me be clear about this fact: we are not breaking any laws, and we are prioritizing safety.”

On Monday, the Attorney General warned that local governments with sanctuary status will cease to receive grants from the Justice Department if they do not follow federal law. If a sanctuary city doesn’t help immigration authorities in the detainment of undocumented immigrants, then it will no longer receive funding.

An Executive Order Signed by President Trump Is at the Core of the Seattle Lawsuit.

“Let me be clear about the president’s executive order: It is violating the law. It is unconstitutional,” Murray said.

According to Murray, every federal cent will be sacrificed due to the statement made by the U.S. Attorney General.

Now Seattle is fighting even harder against the feds.

The purpose of the lawsuit is to get the courts to agree that Trump’s sanctuary city executive order is unlawful. It also aims to force the federal government to define what a “sanctuary city” is, Murray explained. The city says the obscurity of Trump’s executive order means the city is “unable to accurately plan its upcoming budget.” Seattle’s lawsuit targets Trump, U.S. Attorney General Jeff Sessions, and Secretary of Homeland Security John Kelly.

Seattle Mayor Murray has the Support of the City

Seattle City Attorney Pete Holmes supported the mayor’s statements as he displayed a pocket copy of the United States Constitution.

“I hope we will all pull this out more often because it displays the rule of law that is in this country,” Holmes said. “It is this incessant saber rattling, while not adding any context to (Trump’s) executive order, that is not making us safe.”

“We should not allow our local police to be used as a federal militia and that is exactly what they are doing,” she said. “That is unconstitutional on its face.”

Seattle’s lawsuit is yet another local legal inquiry to President Trump’s administration within the first months of the inauguration. The state of Washington sued the administration in regards to both of Trump’s travel ban orders. The orders were put on hold by federal judges while Washington and other states challenged them.