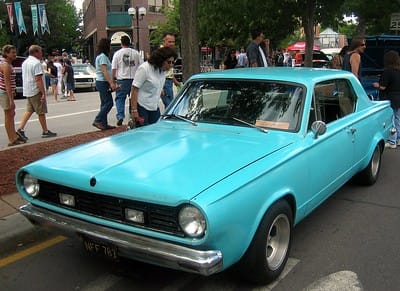 Kurt Cobain wasn’t a stylish rockstar. The pioneer of the early 90’s “Grunge Music” never focussed on the finer things in life nor did he “show off” what he owned. While we do not know the level of automobiles the rocker had driven, we know that the only car he ever owned was a”65 Dodge Dart.

The Dodge Dart was a stylish car for the time. Its streamlined design was developed by Italian designer Carrozzeria Ghia which was later modified to the Dart Diablo. The powder blue and worn aesthetic of the car is very reminiscent of Cobain’s attire and attitude.

The Dodge Dart At A Look

The dart is a stylish, sleek, and durable vehicle. The chassis of the car was rock solid and safe. The straight-six engine was powerful for its time and became the foundation for the Dodge Challenger series. This car has been hailed by most current collectors.

The Grunge Rocker Was Not Known To Drive

Kurt had spent a lot of Nirvana’s founding years bouncing around from house to house. Prior to touring, he was living out of his car. This was an occasional routine up until the band reached commercial success with their album “Nevermind”. At this time, it was mentioned that he lived in a Volvo. This makes sense due to the cost of a vehicle and Kurt Cobain’s lifestyle. Since the introduction to his Dart in at an Irish exhibit featuring the rocker’s iconic items, nobody really knew what he drove.

Kurt Cobain Was A Safe Driver

In the early days of touring, many of the band members would alternate driving from location to location. Many asked for Kurt not to drive mainly because of how slow he was. Although you would think many rock stars drove like wildmen, it is not as surprising to see someone like Kurt Cobain being responsible, especially when there are other passengers in the car.

We’re excited to see this part of the Grunger pioneer’s life. With many rock stars touting their supercars and racing around cities, Kurt offered little to what he owned. It was never his priority to flash his belongings and many that are iconic were mainly purchased at second-hand stores.