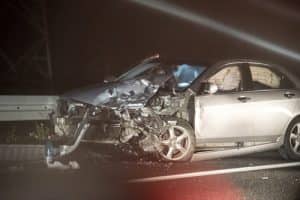 KENT, Washington — A 26-year-old man was arrested after leading police on a wild chase across several highways in South King County Wednesday night.

Police said it all started around 9:30 p.m. on Kent’s West Hill when an officer tried to pull the driver over for having only one working headlight.

The driver sped off and led officers first onto Interstate 5 and then Interstate 405 in Southcenter. They continued onto southbound State Route 167 in Renton, as the driver began to complete his loop back towards Kent, where the chase began.

At one point, police stopped all traffic on southbound SR 167 between S. 180th St. and S. 212th S., but the man drove onto the shoulder around the traffic and kept going. The chase continued for many more miles as they bared down on Kent.

The Police Chase Ended Back in Kent

Police finally caught up with the driver when he exited SR 167 at 84th Ave. S. in Kent. Officers boxed in the vehicle as he tried to enter the onramp to get back on to 167, and then took the driver into custody. They said the driver showed no signs of impairment. This is encouraging news, as the city has unfortunately seen a rise in DUI incidents over the last few years.

No one else was in the vehicle and no one was hurt during the chase. Thankfully, the driver avoided making a far worse mistake.

Let the incredible team at Seattle Car Shipping be your partner for your next move! With our exceptional drivers and dedicated dispatchers, we can ship your vehicle anywhere in the country. And we can do it all for an affordable rate too! Contact us for a free quote today to see just how easy it can be to ship your car with our team.