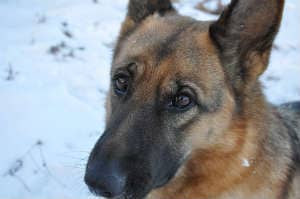 A starving German Shepherd, missing since September, was found and saved from winter storms this week! A deputy, with the help from a local truck driver, saved the dog. According to Snohomish County sheriff officials, Deputy Ron Doersch decided to return to Gold Bar by way of Reiter Road. Usually, he would avoid this path because of logging in the area, as well as the less-than-ideal weather conditions. For some reason, Doersch felt compelled to go back this way… which led to the dog being rescued!

Perhaps instinctually he knew someone needed his help. That someone was the German Shepherd, who he spotted running through the woods. He could tell that the dog was suffering from health issues and starving. When he first attempted to call the dog to him, the dog didn’t respond.

But, luckily for everyone involved, truckers came by from Buck Thomas trucking company and stopped to help. The crew were transporting logs along the same road. One of the truck drivers gave up his sandwich, saved for lunch, to try to lure the dog over to the Deputy’s truck.

The Rescued Dog Will Return to Her Family

And… miraculously, it worked! The starving dog, tempted by the sandwich, and finally approached the men and the vehicle. Luckily for the dog, and thanks to her owners who had her microchipped, Doersch was able to find her home.

The owners, living in Monroe, not far from Marysville, claimed that the dog ran away back in September. They had hoped the microchip would aid in finding her at some point in the future… and luckily, it worked!

After bringing her to Pilchuck Animal Hospital in Snohomish, Doersch contacted the family. With the help of shelter crews, they expect that the dog should make a full recovery and will return to her family.

This is why most pet owners should use microchips, which help locate lost animals throughout the country. What do you think of this lucky dog’s rescue?

Honda has Announced all-new Models will be Electric After 2030