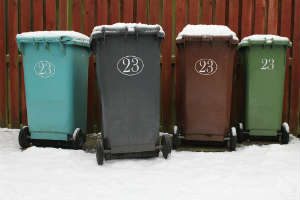 As many Seattle residents have probably noticed‚Ä¶ trash is piling up in the wake of the recent ‚ÄúSnowmaggedon.‚Äù If you‚Äôre bins are overflowing outside your house, you understand. Due to the bad storm, Seattle had to shut down the waste collection. But ‚Äì crews are now working on catching up with all that got left behind. During every break in the bad weather, they‚Äôve attempted to do as much as possible. Unfortunately, there is still more to do! Seattle Public Utilities (SPU) has over 150,000 residential accounts.

So, to help combat the problem, SPU plans to give a ten-dollar billing credit to residential customers. This applies to you if you had two or more missed garbage collections recently. Mayor Jenny Durkan announced this on Thursday.

In a statement, she said: ‚ÄúOur foremost goal as a City is to deliver on essential services like garbage, water and power. Our City departments have been working around the clock during this historic weather event clearing our streets, repairing power lines and bringing our most vulnerable neighbors inside.‚Äù

Pick-Up and Drop-Off This Weekend

In addition, SPU plans to up their game this weekend. Since the weather will be improved, they‚Äôll be able to pick up a lot more trash. So, if you‚Äôre a customer who hasn‚Äôt received service on Monday, Thursday or Friday ‚Äì you should put your bins out starting this Friday. And, for no additional charge, you can put out double the amount of garbage!

And, you also have the option of dropping off trash over this weekend. From 10am to 3pm, there are multiple Seattle locations to drop off garbage. In addition, Friday through Sunday, customers can also drop off garbage, recycling, or compost loads at the SPU transfer stations for free. However, there is a limit of one truck or carload per household for these drop offs.

With any luck, regular garbage services will begin again next week. Until then, the city asks residents for patience during the catch-up period!