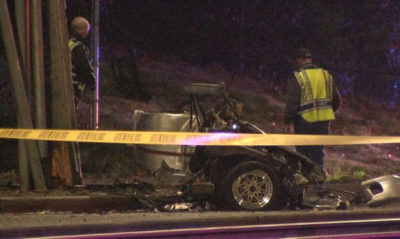 Seattle was left in shock when a man in his twenties was killed in a horrible car crashÂ near mid-night on Monday. The crash occurred in the Seattle neighborhood of Rainer Valley on the 9100 block of Martin Luther King Jr. Way near South Beacon Avenue.
The car hit a pole traveling northbound in high speeds. The car or what was left of the car was an Acura Integra. It split in 2 leaving one part of the vehicle logged into the pole and the other half 100 feet down the road. Police and Medics arrived to the crash scene at around 11:50 pm after getting reports about the accident.
Thankfully, no other vehicles or passengers were involved in the crash. The driver was identified as 22 year old Joseph Lee. His body was found outside of the car on the road. Sadly, He was pronounced dead at the scene. Though what may have caused the crash is unclear, it is guessed that high speed was certainly a factor.
A statement was made by a representative from Seattle City Light about the accident. Farrah Paul from Seattle City light stated that their number one priority is safety, in regards to both motorists and crew members who are out making repairs.
On Tuesday, the Seattle Department of Transportation closed down the northbound section of Martin Luther King Jr Way between Boeing Access Road and Henderson Street. This closure allowed crews to work on replacing the damaged pole. The road was reopened fourteen hours later.
The Seattle police kindly ask anyone who has witnessed the crash to call the hotline for the Seattle Collision Detectives at 206- 684-8923.