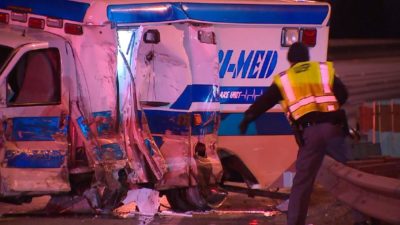 A fatal crash occurred on I-5 in Seattle, Washington. A woman from Oregon is dead after crashing into an ambulance while driving on the wrong side of the highway. The crash took place around 2am near Michigan St.

Emergency crews arrived on scene and found the wreckage between a red For Expedition and an ambulance on the scene.

The driver of the Ford Explorer was identified as 46 year old Angela L Mora, who is a resident of Eugene, Oregon, had to be rescued from the vehicle. She was pronounced dead at the scene.

Inside the ambulance that was involved in the crash, there were two emergency medical technicians and one patient. All three were transported to the hospital with injuries.

Preliminary investigations showed that the driver headed south for over a mile without hitting other cars. As she came near the Albro Place interchange, she crashed into the incoming ambulance. A state patrol report stated that the ambulance made an effort to swerve out of the way but failed. A state trooper witnessed the car driving in the wrong direction but did not make it on time to stop the collision from occurring. Troopers say that the initial cause of the driver driving the wrong way was not because she was under the influence of drugs and alcohol but maybe because she was disoriented or had a medical emergency.

The crash created a huge amount of debris. The cleanup and investigation process took over 4 hours to complete. This became reason for miles long traffic buildup. Since then, all lanes have reopened.