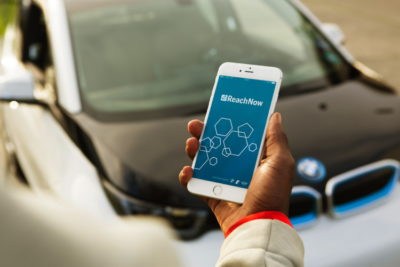 ReachNow, a new car-sharing service by BMW, has been launched in Seattle, using a fleet of 370 cars, including BMW 3 Series sedans, Mini Coopers and i3s. The service resembles Car2Go that is available in Austin and New York, as well as some other cities and uses Smart cars and charges per minute.

ReachNow is a like a short-term car rental that you can get using an app on your phone from anywhere in the city. The app can be downloaded at iOS and Android app stores. The process of approving a new user only takes a couple of minutes. The user can drop off the car anywhere in the city limits, including free parking spaces.

The rates are 49 cents per minute while driving and 30 cents per minute when the car is parked. There are also rates for longer trips: $50 for 3 hours, $80 for 12 hours and $110 for 24 hours. Insurance, gas and parking meters within the service area are included in the fee.