BMW Has An Electric Scooter That Looks Ready To Build!! 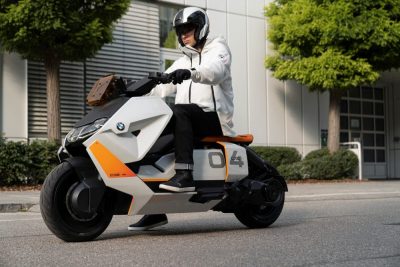 BMW is shoiwng off what very well may be a radical electric scooter. This thing looks like it was from the future. The BMW CE 04 as it’s being called was first mentioned back in August. BMW has since been registering a slew of newer trademarks for both scooters and motorcycles.

The design filings had been seen and sent in for submission to the European Union Intellectual Property Office. They have been able to show off the vehicle which was way similar to the original concept from way back in November. The scooter itself is true to form, compared to the concept vehicle. This is a quality that is almost never a guarantee in the automotive industry. The design itself isn’t quite as changed because the only updates include a rear fender that has a license plate holder. Not to mention a turn signal and a new pair of mirrors. These are all updates that may require homologation. Therefore, this very well could be the series production version.

BMW has been unveiling the CE 04 in a way that the company has been looking at next-gen electric scooters. This is all in the footsteps of the C Evolution.

BMW C Evolution and it’s scooter is trying to use a battery module originally found in the BMW i3 electric car. This is to say that the CE 04 is going to follow a similar strategy.

Now one can say that the BMW CE 04 has certainly some merit previously unrealized by the present company, but then again, who’s stopping this incredible mark of beauty? There’s an elongated chassis, a minimalist design, and quite significantly, a huge enough instrument display that remains. It happens to be a large aspect of the CE 04. The scooter is typically connected digitally. The BMW is therefore important. Very important! Like, the most important! If you cannot dig how monumentally significant it is to someting that is able to run off of some sort of electric power.