9 Arrested in Downtown Protest Against U.S. Immigration in Seattle 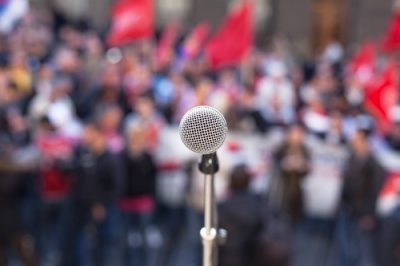 SEATTLE, Washington — Nine people were arrested at a protest that blocked Second Avenue near Union Street and disrupted traffic in downtown Seattle for nearly two hours on Tuesday morning.

The protesters, with the Northwest Detention Center Resistance, said they are opposed to the deportation of undocumented immigrants and called for the abolition of the Department of Homeland Security’s Immigration and Customs Enforcement (ICE).

Police quickly responded to the scene and ordered the protesters to spread at about 8:40 a.m. When the protesters refused to go, officers began to break up the “sleeping dragons,” removed the 9 protesters from the street and placed them under arrest.

The 2nd Avenue was reopened at around 9:10 a.m., but there was a traffic for some time afterward.

The arrested protesters included 6 men and 3 women. They were later booked into the King County Jail for investigation of pedestrian involvement.

Lori K. Haley, the spokesperson for ICE’s western region, issued a statement after the protest saying: “U.S. Immigration and Customs Enforcement (ICE) fully respects the rights of all people to voice their opinion without interference. ICE remains committed to sensible, effective immigration enforcement consistent with federal law and agency policy.”